A horse’s legs are some of the most important parts of its body. Their legs are what keep them moving, keep them active, and well, keep them happy as no horse would want to be sedentary. As a horse owner, it’s vital that you take good care of your horse’s legs. This guide will let you know the different ways you can help maintain your horse’s legs in tiptop shape, from exercises, to the best footwear, as well as grooming tips.

Just like humans, horses need to exercise to stay in shape, especially if it will participate in an event. And even if it won’t, there are many benefits to training your horse’s legs, the biggest reason being to prevent lameness.With a lame horse, it will be harder to keep a good position, and overall more difficult to ride it as its legs are weak. 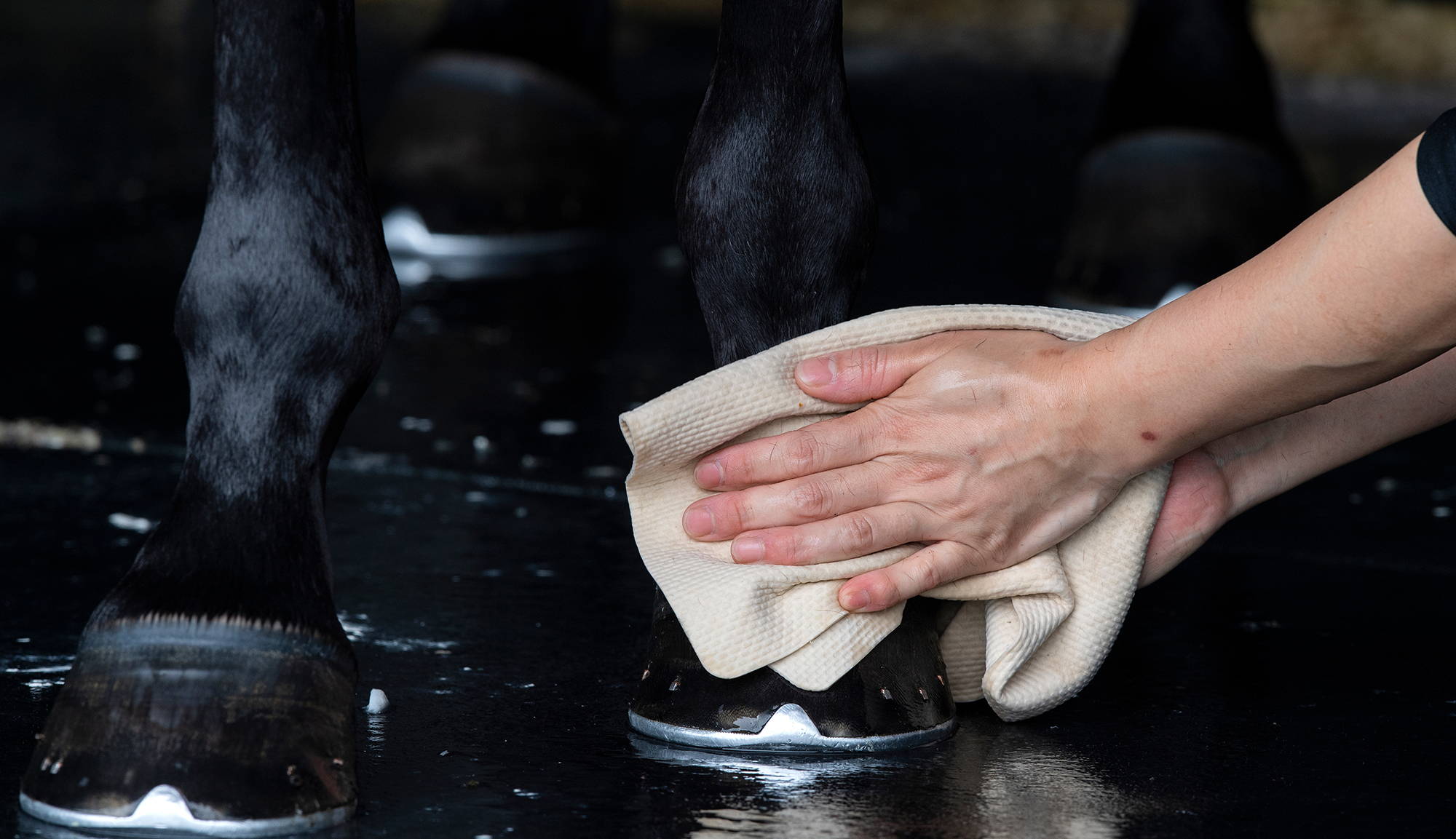 A lazy horse is one that is used to working at one speed or gait, and only on one type of surface. That’s why it’s important to spice it up. Try varying the terrains or surfaces where you will be riding your horse. This exercise is called the Hangbahn. This can be a simple change by taking him to a sloped area, before moving back to a flat surface. You can also try a brisk walk up and down a firm driveway, then ride him around on a grassy lawn. Stimulate their senses with different surfaces so their legs and hooves can learn to adapt.

Another exercise you can try is called interval training, which is very similar to a human cardio workout. Alternate between sprint drills and slow jogs every 50 feet. This will strengthen their legs and deliver more blood and oxygen to the muscles working hard in this activity.

A horse has three natural gaits: walk, trot, and canter. The canter is the fastest gait and has a three-pace rhythm. If you want to improve your horse’s canter, you can try the canter box exercise, which involves placing two poles on the ground parallel to each other and about ten feet apart. Head in a straight line over the center of the poles. Your horse should canter over the first pole and land with all four feet between the first and second poles, and then canter over the second pole.

Eventing is basically a triathlon for both the horse and the rider. It consists of three tests, which are dressage, cross-country, and show jumping. It is indeed a lot of work for the horse as it will go through different trials, but it will be especially straining on its hooves and legs, which is why a variety of footwear is available to protect your horse from specific types of injuries that it is more prone to in the arena.

Support boots are one example. They provide support for your horse’s tendons and ligaments, preventing injuries in that area. There are also fetlock boots, which protect their lower hind legs, but they are designed in such a way that the horse will still feel a pole during a show when they brush against it. They are usually used with tendon boots to protect this area from brushing injuries while performing a jump. Finally, bell boots cover the entire hooves of a horse and protect its heels from overreaching.

Dressage is sort of like a dance routine between the horse and the rider. They are judged on how well they can perform a series of movements. It is very fun to watch, but it requires lots of practice and work, which is why dressage boots exist. These boots protect your horse from interference so it doesn’t injure itself in the middle of its performance and also prevent sore muscles.

Show hunting is a discipline that demonstrates the art of jumping. Horses must overcome several obstacles and are judged on their style and performance throughout the round. Fetlock boots are used for this discipline for the above reasons.

If you are having a hard time trying to fit boots on your horse’s legs, or can’t afford to buy boots, then worry not—elastic bandages are there for you too. While they absorb less impact compared to boots, bandages can still protect your horse from sprains, twists, muscle tears, and cuts.

Proper way to choose footwear for you horse

If you are looking for the best dressage boots, you will want to make sure the boots have a pad or outside shell that will absorb any impact and protect the horse.After all, that is the main purpose of horse boots! However, you will also want to buy something that is comfortable as well, so look out for boots with soft lining and breathable material, such as fleece. This will prevent heat and moisture from getting trapped inside, which can lead to skin irritation.

These are two core features that you will want as well in support boots—a soft, comfortable lining and a durable material that can absorb impact and evenly distribute force. You will want to prioritize protection the most with this specific type of boots, however, so look out for features such as a protective cover or strike plates. Anatomically-shaped horse boots for an easier fit are nice, too!

The best fetlock boots should not affect the horse’s jumping ability in any way—they should protect the horse’s fetlocks and stay secured in that area, but as with other types, they should also be breathable. A micro-perforated material is a great feature, as this will keep the horse cool and dry. The same goes for tendon boots—they should serve their purpose in protecting your horse from interference injuries, but are still comfortable to wear and won’t slip.

Because bell boots cover the horse’s hooves, it’s more likely to get wet, especially when your horse is traveling through muddy or wet terrain. This is why waterproof bell boots are best; they will keep your horse dry and decrease the chances of bacteria accumulation, thus preventing possible infections. 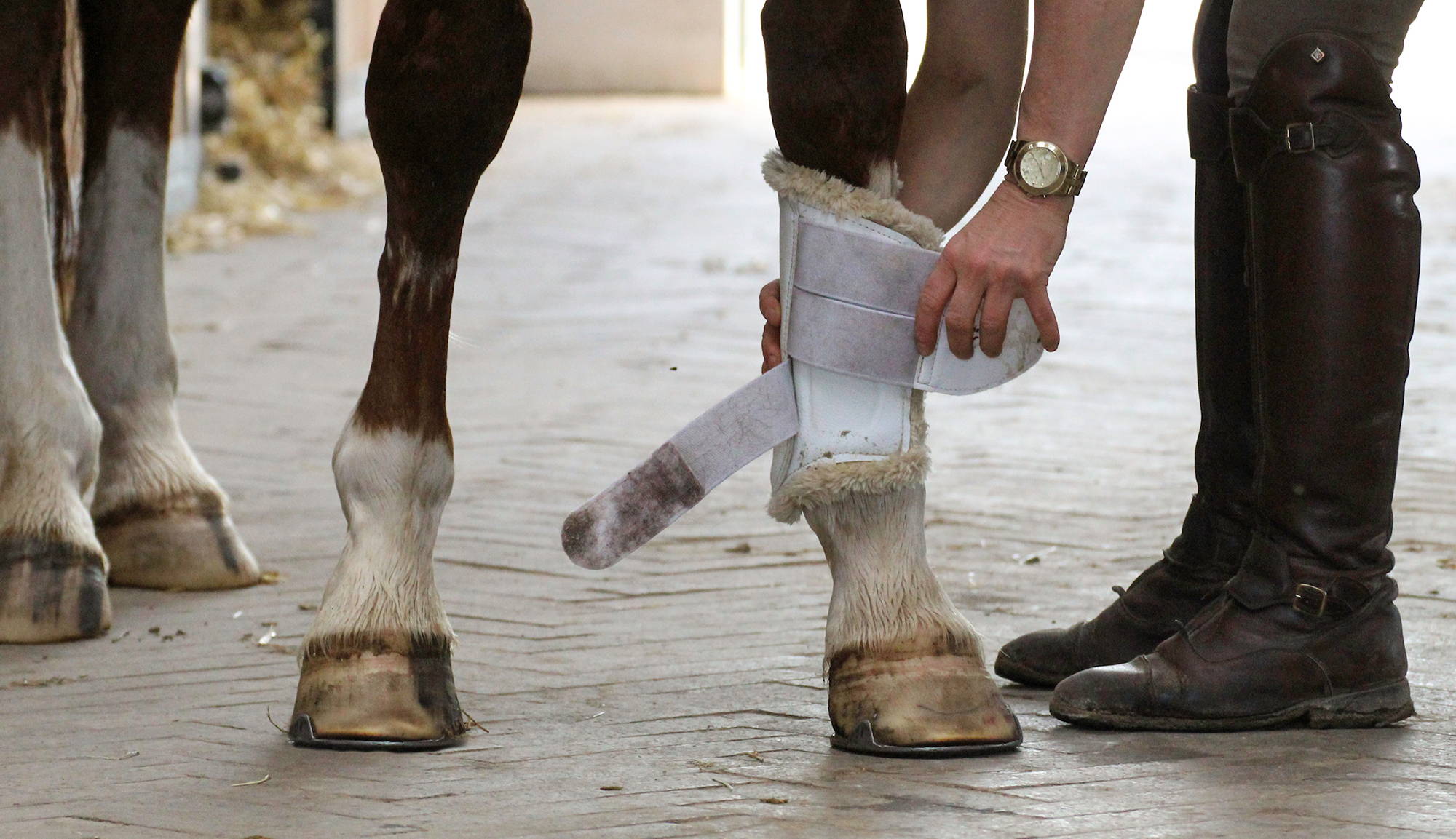 The length, width, and circumference of your horse’s leg, as well as their weight, will be the primary factors for estimating their boot size. Check the sizing charts that manufacturers usually provide for their products to see if your horse will make the cut.

Another way to estimate your horse’s size would be through the cowboy system; horses that weigh under 900 pounds would fit a small size; 900 to 1100 pounds fit a medium-size, and horses weighing over 1100 pounds fit a large size.

To check the fit of your horse boots, you should be able to comfortably slide one finger between the boot and the horse’s leg. The length of the boot should be long enough to cover most of the cannon bone area and the inside of the fetlock.

Before anything else, keep your horse in place by tying a lead rope above the height of their withers and securing them to a post, fence, or even have a reliable companion hold the rope. Use a quick-release knot to prevent upsetting your horse; it may get scared if the knot is too tight and injure itself while trying to break free. You may bring a Marlinspike to loosen the knot or cut the rope altogether if you wish to be prepared for emergencies.

Next, feel your horse’s legs for any possible injuries that you might have missed. These can range from a strange lump or bump to a full-on lesion. Check its hooves as well to see if it has any bacterial infections so your horse can get treated as soon as possible.

Once you have inspected your horse for any possible injuries and hopefully have found none, hose down any mud on your horse’s legs. Give them time to dry off first before proceeding to brush your horse.

To clean your horse’s hooves, use a hoof pick to scoop out dirt. Take caution when cleaning this area as you might nick the frog of their hoof; doing so may lead to lameness. Trim your horse’s hooves every 6 to 12 weeks, especially if it is going to wear bell boots.

These are just some of the things you would have to keep in mind when it comes to the legs of your horse. They may be overwhelming, but a good understanding of how to best keep them healthy can go a long way for your equine friend.