Welcome to the World of Show Jumping: Where to Start and Who to Idolize

Show jumping is a popular Olympic sport for a reason—it requires much discipline and skill from the rider and their equine partner, it’s very challenging, and it’s exciting to watch.

It is a competitive sport where the equestrian and his or her horse jump through obstacles under a time limit. Even if that sounds simple, the obstacles in every show are challenging, requiring rigid training for both the four-legged partner and the rider. It’s not as easy as Olympians make it look!

Is show jumping for all equestrians?

Show jumping is one of the most popular sports in the equestrian world. Its popularity is brought about by several reasons: being a natural spectator sport, the excitement of watching the horse and rider make a clear round. Even someone with no knowledge of the sport will find it enjoyable.

Originating from the United Kingdom, show jumping classes are seen in horse shows around the globe and take on the world stage as an Olympic sport.

Most horse enthusiasts would watch horse competitions diligently, especially those on the Olympic level. If you are passionate about horses and feel excited overseeing equines and the equestrians clear each round, why not give it a try?

Even as a beginner, there are a few exercises you can do to see if show jumping is somethingyou and your four-legged pal would enjoy. Training your horse to trot and canter over ground poles serve as the foundation to jumping. It will take a while for you and your riding partner to get through the poles, small jumps, figuring out when to jump or how many strides to take before jumping.

Your jumping rider position goes hand and hand with your horse training. Stay centered on your equine partner’s saddle while off your horse’s back. Your point of contact should be on your legs with your weight in your heels, not on the seat, to help your equine have full mobility and clear the obstacle.

Horses Born and Bred to Do Show Jumping

While many breeds are successful in show jumping, a prerequisite is that they should already be around 4 to 5 years old, fully developed, and 16 hands tall or more. This isn’t a hard and fast rule, many four-legged pals who were shorter than 16 hands have gone off to win Olympic medals. Most horses who compete in show jumping are Warmbloods or Thoroughbreds because of their natural disposition and attitude. 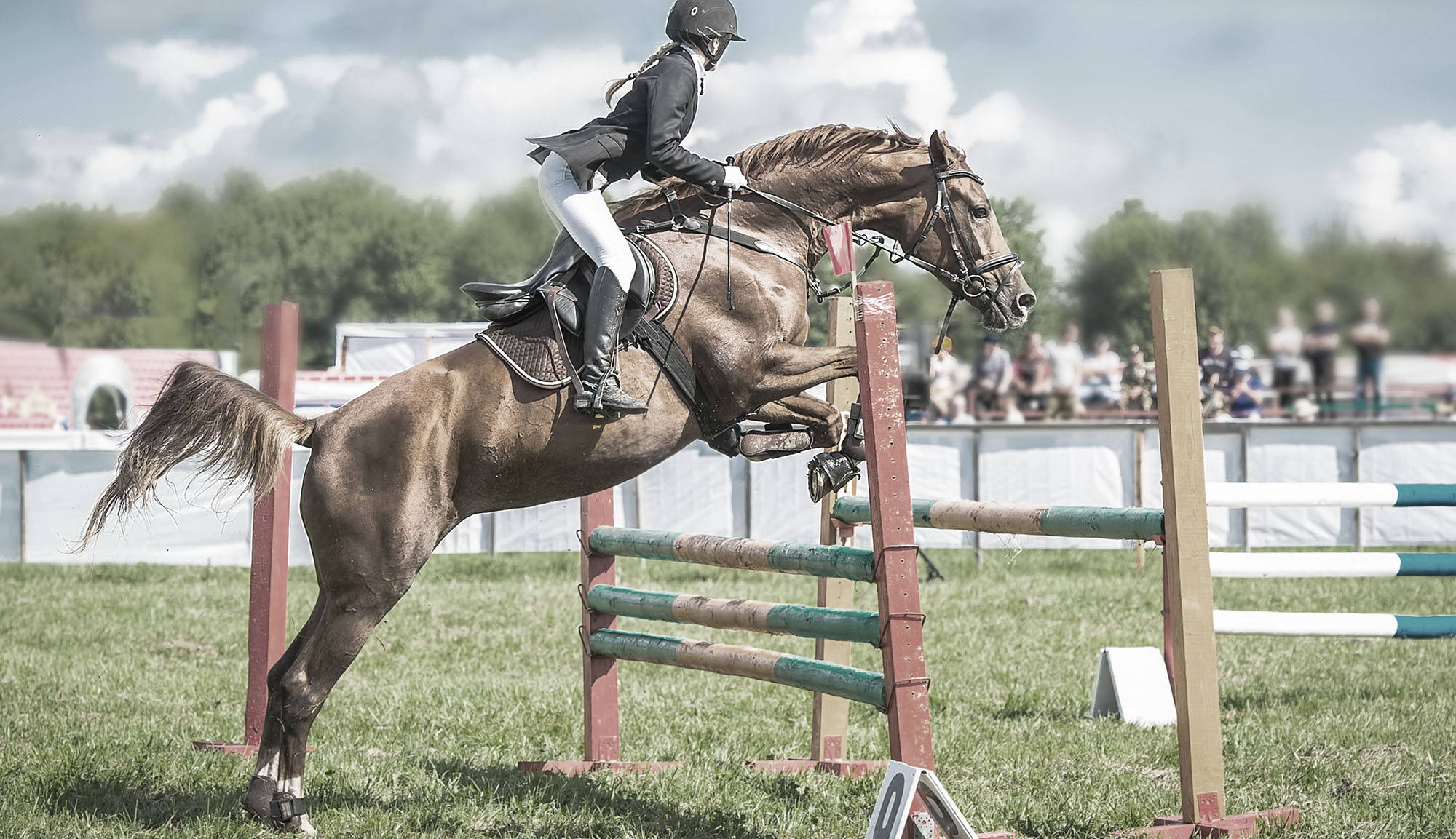 You can choose which class or division to enter, depending on how far you’ve come with your training. The course, the time limit, and the height of the jumps you need to clear will differ per division. Read about each division to check jump heights, time limits, and obstacles to see if it’s suited to your capabilities. A show can change courses per day, so it’s best to read each division carefully to prepare.

There is an objectiveness with scoring in a jumper class. If you and your horse attempt an obstacle a certain amount of times, clears the obstacles laid out, and finishes the course within the time limit, then you receive the appropriate score.

The most basic move to be done in a jumper class is to jump cleanly through a set course within a time limit. But not all obstacles are created equal, and this would depend on the competition you are entering. In general, each course would contain obstacles like spreads, verticals, double combinations, all of which will entail that you and your horseback riding partner show how you change direction and turn.

If your equine refuses to make a jump or go through the course, incurring a certain number of refusals can get you disqualified.

Unlike the jumper class, the Hunter class can be subject to the judges’ preferences. In this class, the rider is judged in terms of style, manners, and way of going. Horses that are well-mannered and consistent do well in this class. These aren’t as objective or numerical as the jumper class.

Also called equitation classes, the class focuses on the equestrian’s ability. Like a marriage between the jumper and hunter classes, the equitation class combines the technical difficulties of a jumper class with the conservative look and turnout of a hunter class. To garner high scores in this class, you will need to attempt a course that will contain combinations, rollbacks, and other progressively more difficult obstacles than those found in a jumper class.

You have the option to memorize your course before the actual competition to familiarize yourself and your riding partner. Most show jumping competitions will allow equestrians to go through the course without the jump-offs. This is to serve as your warm-up, so that you and your partner can get used to the course before the actual competition. Take note of how many strides are needed between each jump and from which angle, if necessary.

No matter the size of the show jumping competition, the rules are primarily the same--the same goes for the penalties. Penalty classifications fall into two groups: Jumping penalties and time penalties.

Jumping penalties include when your horse or stallion refuses to go through the obstacle or does a knockdown.

Time penalties have changed throughout the years, but what has remained is that show jumping, overall, is a time-sensitive sport. If you don’t adhere to the time limit set to clear the round, you incur a penalty. 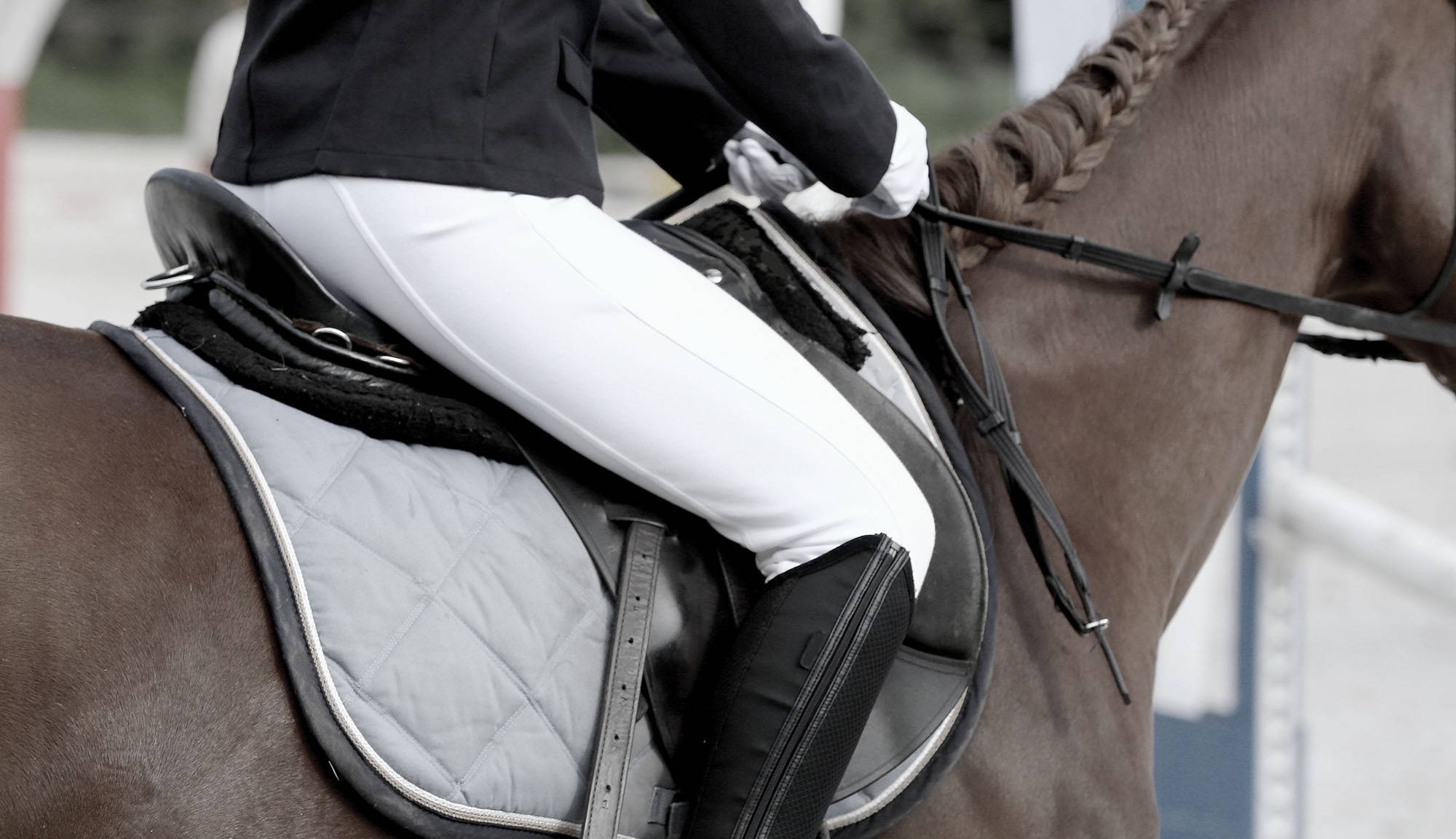 Show Jumping Attire for You and Your Horse

As for the basics for horse riding gear, start with an approved equestrian helmet—it is a must for any competition you enter. For your first show jumping competition, the rules on rider attire won’t be as strict—breeches, perhaps a short-sleeved polo shirt, and equestrian boots would do. For bigger competitions, you will be asked to wear a show jacket, field boots, and gloves.

Since hunters are scored based on their style, manners, and way of going, riders tend to be conservative. The same goes for your equine partner. Your horse's tack must adhere to the rules of the competition and also stick to the convention. This means that you and your four-legged pal don’t need to be distracting, flashy, or loud; your turnout and the ability of your equine must speak for themselves.

Because of the close contact needed between the rider and their four-legged pal, horses need an English saddle. You will also need a bridle, martingale, stirrups, and a girth.

Another must-have for horses areboots and horse leg wraps. With the stringent movements to clear obstacles in show jumping, such as swift turns, landings, and the like, it’s necessary toprotect your equine partners, keeping their horse muscles healthy in any way possible.

Beginners don’t need to include saddle pads like gel pads unless it will help you and your equine partner stay comfortable and protected.

The Show Jumping Icons You Should Know

Watching show jumping icons who have come before you will give you knowledge that you can’t get from anywhere else. Think of it as learning from the pros!

From the FEI Show Jumping World Cup to the Olympics, equestrians and their horses have become known in the horse world for their success. These are some of the show jumping legends that beginners can look up to.

The first woman inducted into the Show Jumping Hall of Fame, Kathy Kusner was just 21 years old when she set the U.S. Ladies High Jump record. She went on to join the United States Equestrian Team (USET) by 1961 and became the first American female to win a medal in the Olympics when the USET won a team silver medal in the 1972 Olympics. In 1968, Kusner had to go to court to gain recognition as the first licensed female jockey. She went on to ride races all over the world, from Mexico to South Africa!

Thought to be one of the most successful riders in the United States, Rodney Jenkins was a force to be reckoned with from 1960 to 1980. With a love of horses in his blood, he won more than 70 Grand Prix victories.

With two team gold medals, one team silver medal, and one individual bronze medal in team jumping in the Olympics, Beezie Madden is the first American to break into the international Top 3 show jumping rankings. In 2004, she earned more than $1 million in show jumping earnings, making her the first woman to do so.

Rodrigo Pessoa was only 19 years old when he represented Brazil in the 1992 Olympics, making him one of the youngest riders to compete in the games. He went off to participate in six Olympic games, win a gold medal, and carried his country’s flag in the 2012 Summer Olympics. He has also won 70 Grand Prix events. He is the only rider who won the FEI in three consecutive years, in 1998, 1999, and 2000 with the same equine partner, a Selle Francais named Baloubet du Rouet. The stallion and Pessoa is a match made in show jumping heaven, marking Baloubet’s most competitive years.

The winner of the first FEI Show Jumping World Cup back in 1979, Hugo Simmons went on to win the trophy again two more times in 1997 and 1998. An Olympian who went to the games six times, he won the silver medal when he was 49 years old. At 69 years old, he won the show jumping Grand Prix, being the oldest winner of the competition.

The first individual gold medalist for show jumping, William Steinkraus was the first rider from the United States to get the gold. Steinkraus participated in 5 Olympics, belonged to the United States Equestrian Team for 22 years, where he served as Captain for 17 years. He went on to win four medals in the Olympics.

Show jumping is very entertaining to watch, and inspiring for fellow riders to try out for themselves. Like any equestrian sport, it takes practice, training, and determination to succeed in show jumping. Clearing a round begins with the basics, a great coach who understands your goals, and a riding partner who will be with you all the way. Time to make the jump!