The Akhal-Teke: Get To Know The Story and Majesty Behind The Legend

One of the most distinctive breeds in the world is the Akhal-Teke, with its signature metallic coat and flat-muscled build. It may not be as big-boned as the other breeds, but the Akhal-Teke is fast, sturdy, and can withstand any climate or circumstance. If you are seeking an equine partner for life, the Akhal-Teke is a “one rider for life” kind of horse—they are extremely loyal and protective of their riding partner.

With only 10,000 Akhal-Teke all over the world, it’s no wonder that there’s so much curiosity surrounding the breed—likely, even the most seasoned of equestrians have not seen one in their lifetime.

In this article, we’ll talk about:

What’s an Akhal-Teke, and why are they so rare?

An Akhal-Teke has been around for thousands of years, being one of the oldest known domesticated horse breeds. It is even said that the equine remains found in Siberia that are dated to the 6th century have many similarities with the present-day Akhal-Teke, making it likely that it could be the same breed.

Named after the Teke Turkmen tribe who lived by the Akhal oasis, the Akhal-Teke traces its origins back to the Karakum desert in Turkmenistan. Since the desert is its natural habitat, the breed knows how to endure extreme climates, and survive with very little food and water.

Originally bred by nomadic tribesmen who needed to be quick and agile, some notable persons from history were said to have Akhal-Tekes in their stable, such as Alexander the Great and Persian Emperor Xerxes.

The Akhal-Teke was considered purebred for thousands of years because Turkmenistan was inaccessible to other breeds. It was only when the country became part of the Russian Empire in the 19th century when breeding farms were created. To this day, the Akhal-Teke is seen as a status symbol for the rich because of its rarity—less than 10,000 Akhal-Tekes are known to exist all over the world.

The breed’s rarity doesn’t mean that they don’t share family ties with other breeds. The Akhal-Teke share similar ancestry with famous and more familiar Arabian and Barb breeds, as well as the Turk breed. 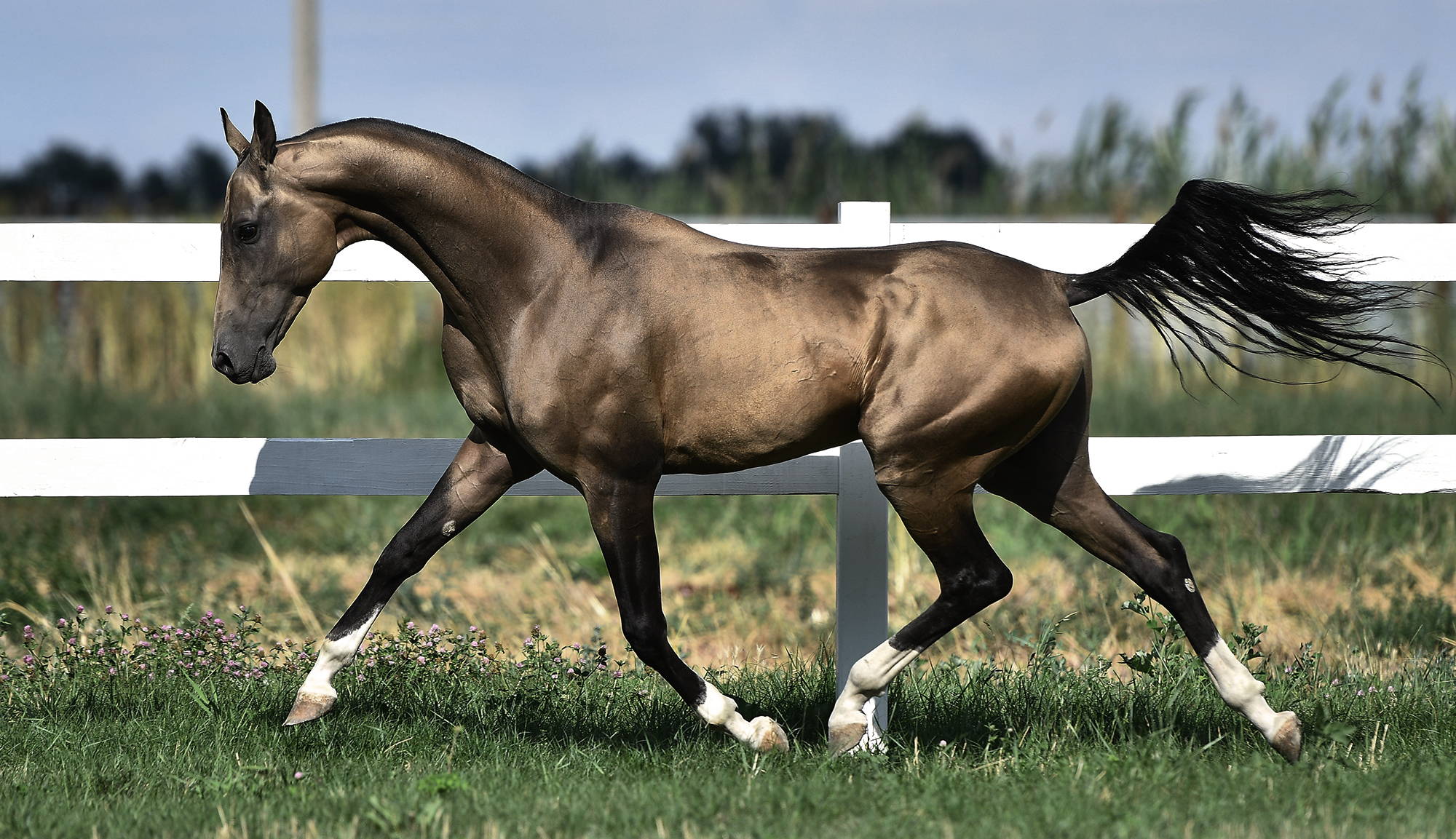 How to Spot an Ahkal-Teke

If you are lucky enough to see an Ahkal-Teke horse, the first feature you will notice is their one-of-a-kind metallic sheen. All equine colors, like a black Akhal-Teke, are accepted in an Ahkal-Teke’s breed registry, but they are usually cream-colored, giving them a golden metallic hue. Because of this, the Akhal-Teke golden horse is the phrase most commonly used to describe the breed. The metallic-looking coat is simply how an Ahkal-Teke is built—their hair shaft doesn’t have the usual opaque center, so this breed’s hair refracts or bends the light, making them look like they have a metallic sheen. It is said that it is perhaps how the Ahkal-Teke “camouflage” themselves in the desert, adapting to their environment to be as undetectable as they make their quick getaway.

Another thing you will notice is the build of an Ahkal-Teke. They are fine-boned, have flat muscles, and have a long, straight, narrow neck and head. They have high withers, sloping shoulders, a narrow chest, with very straight forelegs. Standing between 14 to 16 hands and weighing around 900 to 1,000 pounds this breed is one of the smaller, leaner of the full-size horses. It is said that the diet of the Ahkal-Teke should still be what they are used to eating in the desert. Even with the introduction of green food, owners would still give the diet that Akhal-Tekes are used to in the desert, which means no green grass, yes to grains and hay, to maintain their lean figure and agility.

Even the shape of their head and eyes are due to thousands of years of adapting to their environment. The Ahkal-Teke’s hooded almond eyes can get through sandstorms and run through the desert, without needing to stop.

The Uniqueness of an Akhal-Teke Equine

If you are lucky to come across an Ahkal-Teke, you will hear from their riding partner that these equines are “one rider” horses, meaning that they are fiercely loyal to just one person, and will also defend their owner from perceived threats. It may be due to their long history of not being in herds but tethered just outside their owner’s location, which perhaps strengthened the one-on-one bond between the riding pal and rider. This loyalty also translates to them being very intuitive over their riding partner’s needs and cues, even going so far as being called out to have the ability to read their rider’s mind! They say that the gaits of an Ahkal-Teke are unlike any other—some say it’s the smoothest ride an equestrian will ever experience. The ride is powerful but fluid, with very little swinging. Their centuries of running through sand deserts have made their pace soft, smooth, and swift.

Because of the intuitiveness, endurance, and agility of the Ahkal-Teke, they have gone on to do well in competitions. The breed does well as a racehorse, with 200 equines brought to Great Britain back in the 17th and 18th centuries. Their breeding resulted in modern-day racehorses in the country. And even if they are seen as leaner and less athletic than deep-chested, muscular equines, they have proven themselves to be able to compete, going to the Olympics and doing well in jumping and dressage.

Turkmenistan, the country where Ahkal-Teke originated, is proud of its love for the breed. Turkmenistan has the horse in its coat of arms, currency, stamps, and is the national symbol of the country. There are many monuments built in the country in its honor, showing how much the Ahkal-Teke is an integral part of the history of Turkmenistan.

Where to Find Akhal-Tekes Now

While the breed has since been brought to different parts of the world, the majority of Akhal-Tekes are still found primarily in its homeland, Turkmenistan, and in Russia. The concentration of the breed in these two countries may be the reason why seeing an Akhal-Teke is a rare sighting. At times, Turkeminstan gives an Akhal-Teke as a diplomatic gift to another country, showing just how much they see the breed as a prized possession. 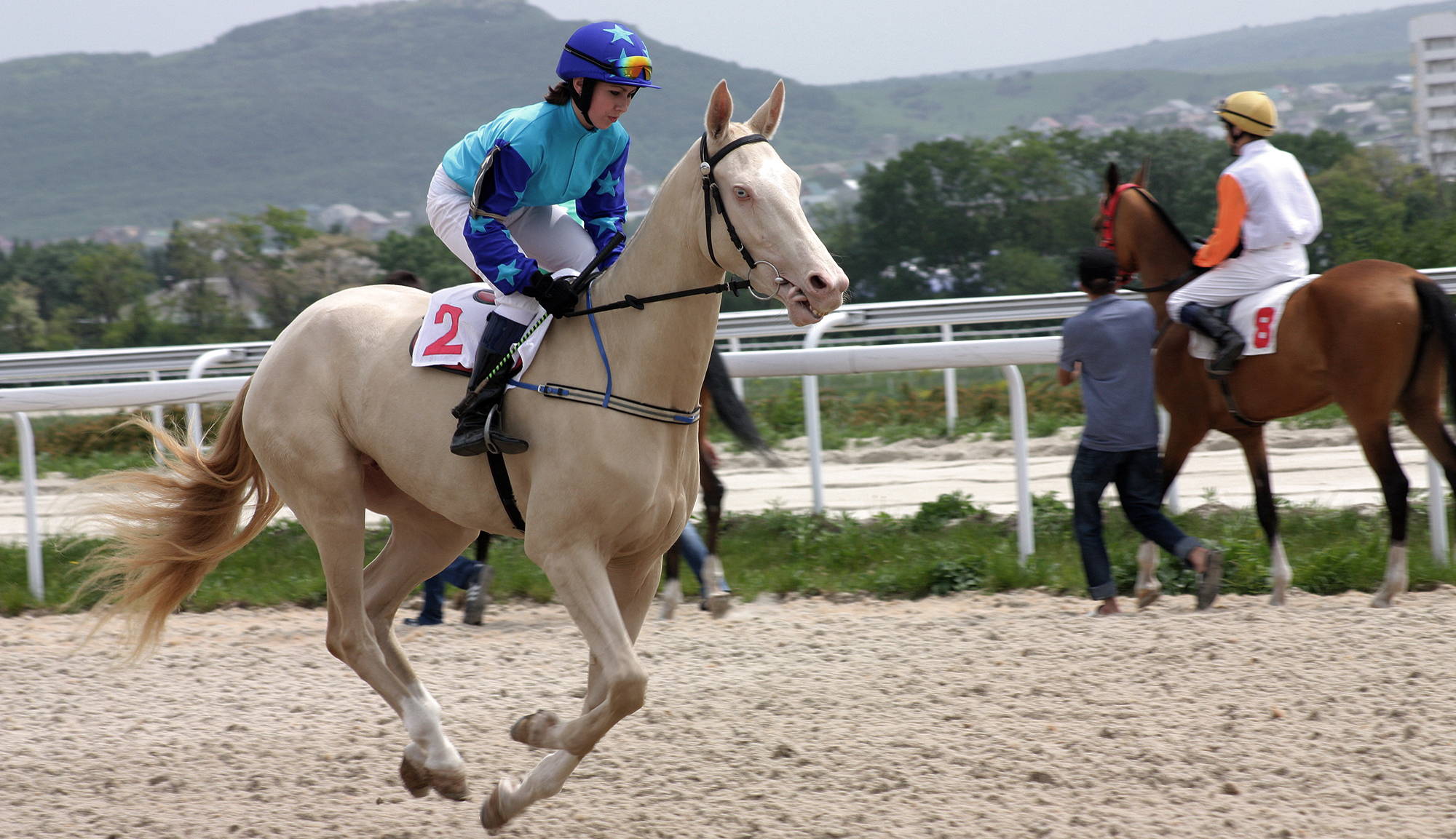 How to Add an Akhal-Teke to Your Stable

Because of its scarcity and rarity, it is difficult to see an Akhal-Teke, let alone purchase one. Most equines hail from Turkmenistan and Russia, so the best way to adopt or purchase them would be from these countries.

However, other countries, such as the United States, may have Akhal-Teke in their herd. Considering that they are fiercely loyal, “One horse for one rider” creatures, it will take a while to earn the trust and loyalty of the Akhal-Teke for you to become their only riding partner. But, with the right training and care, it’s not impossible!

The starting price of Akhal-Tekes is usually at $7,000, but of course, the price goes up, depending on the usual factors that come into play when purchasing a horse, such as color, training, bloodlines, age, conformation, and show record. The price can even skyrocket to the tune of up to $100,000. Because of their dwindling numbers and distinctive build, they are one of the most expensive equine breeds in the world.

Taking Care of Your Akhal-Teke

If you do manage to find yourself an Akhal-Teke, taking care of them is just like other horse breeds. It might even be easier compared to other breeds since the Akhal-Teke is known to be a hardy equine that can last with very little water or food. Even with their metallic sheen, it’s easy enough to keep them clean. At least once or twice a week, brush and comb your Akhal-Teke, and keep a regular bathing schedule. Daily inspections of their hooves will also help prevent infections or injuries from worsening.

Since the Akhal-Teke was in isolation in their home country for centuries, they lack the genetic diversity found in other breeds. Because of this, they are more prone to health conditions. Akhal-Teke foals might have naked foal syndrome, wherein foals are born hairless, have abnormalities in the teeth and jaw, and sometimes have concerns with digestion and pain tolerance. They may also have wobbler syndrome, causing an uncoordinated gait, but the symptoms can be alleviated or managed through medical attention.

If you are adopting an Akhal-Teke from their previous owner, know that since they are very loyal, it will take time and dedication for you to earn their trust and loyalty. However, they live at even the harshest of climates and the strictest of diets, making it easy for them to adapt anywhere you bring them.

The Akhal-Teke doesn’t respond well to harsh, authoritarian training, perhaps since the breed is used to being treated and cared for as part of one’s family. Adopt a gentle approach to training and they will respond better. Since the Akhal-Teke is prone to genetic conditions, the use of a proper, quality horse tack and saddle pads, depending on their needs, would prove to be most useful in managing any symptoms, or simply creating a smoother, more healthy ride for both the rider and four-legged friend.

Any equine aficionado would consider themselves blessed if they ever get to see the legendary Akhal-Teke with their own eyes, and very few are lucky enough to own one in their lifetime. Beyond their distinctive build and signature metallic sheen, having an Akhal-Teke is having a riding partner for life. You will love them for their intuitiveness, loyalty, and devotion.